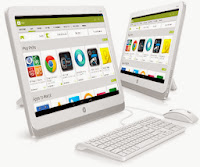 When you look at the Slate 21, and you look at the tech specs, it's hard to avoid the thought about the small specs of the machine when it comes to RAM and Storage: 1GB of RAM, 8GB of Storage.. what the engineers were thinking??

Nevertheless, I'm a proud owner of such a slate, and I want to share with you some tips that could help you with the Slate 21. Some of those tips will require root privileges.

Please note: So far, it seems that HP is doing their best to block any rooting attempts. Their latest update includes security patches from Android 4.3 and 4.4 which prevents all known rooting methods from working (and I tried all of them so far). However, when it comes to a chase between HP and Android "hackers" - those "hackers" will win (there's not a single Android device that hasn't been rooted so far, other then this Slate). Remember - if you root it (or unlock it), your warranty is lost.

So here are my tips, some of them requires root, and when such a tip requires these privileges, it will be marked with root: